An engineer, Richard James, was working on a spring to support equipment on ships in rough waters. One of the springs fell off a table and kept moving—it “walked” across the floor. James thought it moved funny and told his wife, Betty, that it would make a great toy. She agreed and named the toy, Slinky, meaning sleek and elegant. Richard James then invented a machine that made a Slinky every 10 seconds. 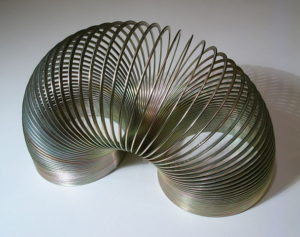 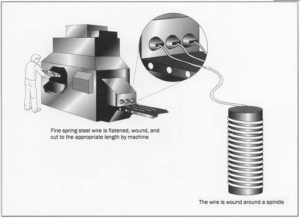 Richard James and Betty took the Slinkys to a toy store to sell. They rolled them in paper with instructions, but since customers couldn’t see the Slinkys move, they walked by without even noticing. To solve this, Richard James said, “We put them on the edge of a table and knocked them off. We sold 400 in 90 minutes.” Everyone wanted a Slinky.

Here’s a slinky on a never-ending stairs. Imagine how many they’d have sold if they had this!

400 million Slinkys have sold since that day (enough to circle the earth 150 times) and it is still made with the equipment Richard James created. There’s even a Slinky stamp from the U.S. Postal Service. 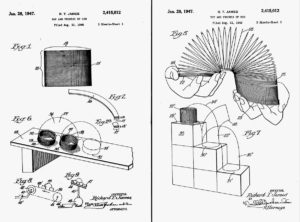