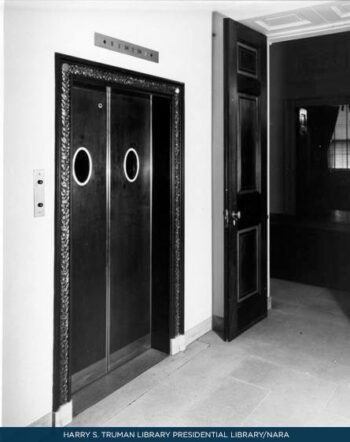 In the picture below you can see one of the most famous White House elevators as it was during President Truman’s time. It had replaced a back staircase that Abraham Lincoln used get away from everyone–any visitor could walk into the White House in President Lincoln’s time and tell him what was on their mind.

But what does that have to do with the cat and the pony? Lots.

When he wasn’t locked up in the guardhouse because he liked to terrorize the squirrels, birds, and rabbits living in the White House yard, President Coolidge’s pet cat Blacky (or Blackie as some citations have it) liked to ride up and down in the White House elevator. He’d sit in front of the elevator and wait for someone to open the door. Then he’d hop on the seat in the elevator and ride up and down.

We couldn’t find a picture of Blacky but here is Tige, another of President Coolidge’s pet cats who liked to roam. This is a police officer who found him after President Coolidge put out a radio announcement that he was lost.

President Coolidge was the 30th president during the time called the “Roaring Twenties” but he was anything but roaring, being known as “Silent Cal.”

Blacky wasn’t the only pet who rode the elevator. When President Teddy Roosevelt’s son Archie was sick with measles and isolated from the family on an upper floor of the White House, his brother Quentin brought their pony, Algonquin, up for a visit using the elevator–Algonquin weighed 350 pounds!

The elevator had a mirror and Algonquin was so enamored of himself, Quentin had a tough time getting him out of the elevator. (Quentin also liked to ride on top of the elevator with his friend Charlie Taft, son of the next president. Don’t try that at home. Actually don’t try bringing a 350-pound pony up an elevator either.)

President Teddy Roosevelt was the 26th president and loved the out-of-doors, which he encouraged his children to enjoy as well. As President he started our national parks and won a Nobel Prize for helping stop a war between Japan and Russia.