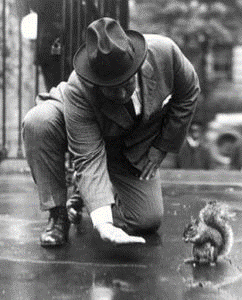 Would it surprise you to learn that in the lovely White House in Washington, DC, with its Greek-inspired pillars and pristine green lawns, our presidents and their families kept dogs, cats, and canaries? But what if we told you that they also kept raccoons, mockingbirds, turkeys, cows, goats, snakes, horses, ponies, pygmy hippos, bears, a donkey, a bobcat, a goose, and alligators (more than once). They did and for the next few weeks, we at Squirrels at the Door are going to feature funny, silly, and sometimes outrageous stories about those pets.