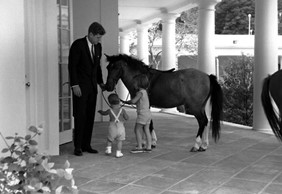 Part of the Pets at the White House series.

President John Kennedy’s children Caroline and John had so many pets (hamsters, dogs, cats) that it cost $1500 a month to care for and feed them. The pets included three ponies, including one called Macaroni for Caroline.

But President Kennedy’s children couldn’t top President Theodore Roosevelt’s children for pets. They had over forty including a Fierce, a one-legged rooster, Josiah the badger, Eli the macaw, and Peter Rabbit.

Once one of President Roosevelt’s son’s ran into the Oval Office with an armful of snakes. He dropped them on the table in front of a group of senators so he could hug his dad. The snakes, including a five-foot king snake, attacked each other and the Senators decided they needed be back in the Senate—there must be a bill to vote on somewhere.

Theodore Roosevelt was the president who began settings aside land for our national parks, and he thought that by his children having pets they would learn to care for others and the natural world.